Each episode we’re going to be talking about information security and technology security issues that matter to business, not just the technologists. The big story this episode is the news that the NSA intentionally weakened encryption standards and products, allowing them … and who else … to get access to what you thought was protected.

The hot news of the past couple of weeks is that the NSA’s attacks against cryptography. It was revealed that the NSA had intentionally weakened cryptography standards developed by the National Institute of Standards and Technology (NIST), which sets official technical requirements used by government agencies, several regulatory requirements and a large number of US-based companies. It was also revealed that the NSA has groundbreaking capabilities to decrypt protected data. Details of these revelations are not clear, but speculation abounds.

On the podcast we touch on many different issues and potential issues.

Some other topics touched on during the podcast include: 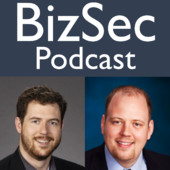